Dr. Dora Elia Cortés, an active member of the United States-Mexico Border Health Commission, research professor and coordinator of the Center for Research and Development in Health Sciences (CDS UANL), and a member of the Binational Border Health Thematic Network, Presented the link communication bound between the USMBHC, the BBHTN and Nuevoleonesa Public Health Society A.C., as part of an investigation in the United States – Mexico border, last April 12, with the topic “Strengthening research capabilities in the United States-Mexico border”. 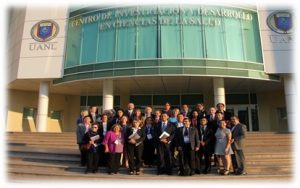 She explained that the United States–Mexico Border Health Commission (USMBHC) is a bi-national agency, created in July 2000 by an agreement between the governments of Mexico and the United States. It operates through the Secretariat of Health and the Department of Health and Human Services at the federal level, and is made up of 12 members from each country (secretaries of federal and/or their delegates, the state secretaries of health and representatives of the civil society), plus an executive secretary for each section.

She presented the BBHTN, as an agents association who are interested in the health of the population along the border, constituted by experts of the 10 Border states of Mexico and U.S. The members of the Network are researchers, professionals working in the field of health, students and members of civil organizations.
Its main objective is to integrate the capabilities of individuals and organizations in the public, private and social sectors of the Border States in order to contribute the improvement of common challenges in conditions of public health in the U.S.–Mexico border from the priorities established in the Healthy Border 2020.
She also spoke of the Virtual Health Library Border (BVSF, by its Spanish acronym), a fortress on the border, this is the “organized collection of sources of information for the management of scientific activity in health, is a space of interaction between the persons and institutions linked to public health of the United States-Mexico Border”.  It has the objective to establish itself as a storage system, and digital publishing of academic, scientific, technological and innovation to the institutions of the U.S.-Mexico Border.
The link’s aim of the Nuevo Leon’s society Public Health and the USMBHC, is the creation of collaboration ties between the institution and Binational Border Health Thematic Network, in order to work on collaborative actions in binational health, scientific, academic, technological, information and communication, as well as training human resources of high level in order to strengthen the research, monitoring and evaluation in the field of binational health for the benefit of our society.